A rainbow appears above a horse pasture West of Leesburg

Pot of Gold at the end of the rainbow: The Loudoun County Executive Airport 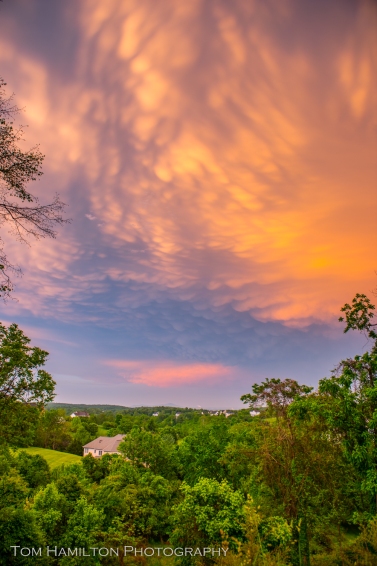 A post-storm sky full of Mamatus Clouds above the rural Loudoun Suburbs, West of Leesburg

Zoomed in, its clear to see the puffy mamatus clouds drooping beneath the thunder head. In the distance is Sugarloaf Mountain and Dickerson, Maryland

This past week saw some of the first thunderstorms of the season for 2017.  Rolling through on Thursday night, they caught most of us off guard, as the forecast wasn’t calling for thunderstorms until the following day.  Fortunately, I had the opportunity to head out, upon learning about them.

This shoot started on the West side of the storm as it departed Western Loudoun County.  Eventually, I ended up at Dulles Airport to shoot “The Iconic Dulles Shot” with lightning in the background.  This was by far my best image of the night.  I love how my D810’s imaging sensor was able to extract dim details from the scene, like the faintly visible mamatus clouds in the sky above.