I’ve dreamt about exploring Big Bend National Park since I was a child.  However, I’d never been able to make it out to this sparsely visited gem of the National Park System.  The reason: the distance and travel time to get there are too great.  Like so many other things in life though, great things come to those who are willing to put in the effort to achieve them.  So, my wife set out on an 8+ hour drive from the DFW metroplex.  I was pleasantly surprised by how easy this drive was though.  What would be a “pull your hair out in frustration” drive on the East coast was a very relaxing and relatively scenic drive across the Texas Hill Country and into the Chihuahuan Desert.   Low traffic volumes, friendly fellow motorists, and 75-80 MPH speed limits made the drive a breeze.  Given the option, I’d rather drive 10 hours across West Tex versus 1 hour on I-95.

As previously alluded to, Texas is vast and this vastness is best expressed in it’s 2 phenomenal National Parks.  In addition to incredibly unique flora & fauna (more on that later), the vast views make these places what they are.  Standing in the middle of the desert, it’s easy to see Mountain Ranges from over 100 miles away.  When you couple that visibility with unique rock formations and beautiful plants, you have the ingredients for incredible photographic material.  Of all the places I’ve photographed, I found Big Bend NP the easiest.  Beautiful views could be seen everywhere and interesting foreground plants abounded.  Some of these plants (agaves, ocotillos, and cacti) along with unique animals (tarantulas!) can’t be found anywhere else in the United States.

Alpenglow on Casa Grande in the Chisos Mountains. Beautiful scenery is pervasive in Big Bend. 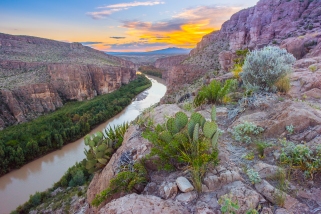 Sunset on the Rio Grande.

Pre-sunrise glow from atop the Lost Mine Trail in Big Bend National Park. 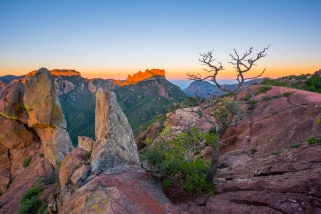 Alpenglow illuminates the Chisos Mountains, as seen from the Lost Mine Trail in Big Bend National Park.

Sunset on the Rio Grande. Alpenglow illuminates the Santa Elena Mountains in Mexico.

moonrise behind Casa Grande in the Chisos Mountains. Beautiful scenery is pervasive in Big Bend.

Alpenglow on Casa Grande in the Chisos Mountains. Beautiful scenery is pervasive in Big Bend.

But it gets better, Texas is also home to another unique & beautiful National Park, Guadalupe Mountains NP.  Highest Point in Texas is just one of this park’s superlatives.  It also houses one of the world’s largest coral reefs.  Geologists from around the world come to study the ancient reef material that now comprise the rocks that jut 5,000′ from the surrounding desert floor.  The park is also 1 of 2 places in North America where pure white gypsum sand dunes (the same sand that comprises White Sands New Mexico) occur.  The flora here is also impressive: the mountains support the Southernmost Rocky Mountain biome, while the base is Chihuahuan Desert (found mostly in Mexico).  Within a 3 mile hike you can see agaves, cacti, ponderosa pines, maples, and douglas firs. 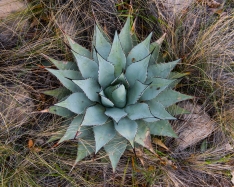 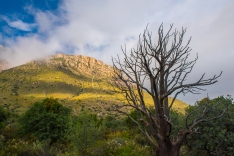 Juniper tree in the Guadalupe Mountains

The Guadalupe Mountains seen from afar in the fertile Dell Valley. 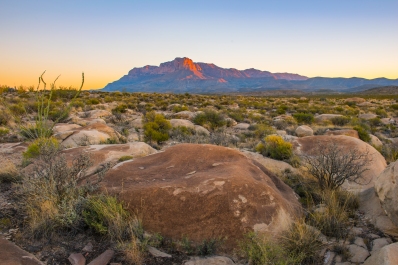