Growing up in a family that loves trains, I would often be dragged along to see various trains and locomotives at home and abroad. Fortunately for my dad/uncles, they didn’t have to do much dragging because I find the “iron horses” of old to be fascinating. It had been a while since I had seen a steam engine in action, so I was excited about the prospect of seeing one of the greatest (and last) steam locomotives ever built.

I set out on the morning of June 7th and picked up the 611 at The Plains, followed by Delaplane, Markham, and Front Royal (all made possible by the line’s close proximity to a 70mph interstate). 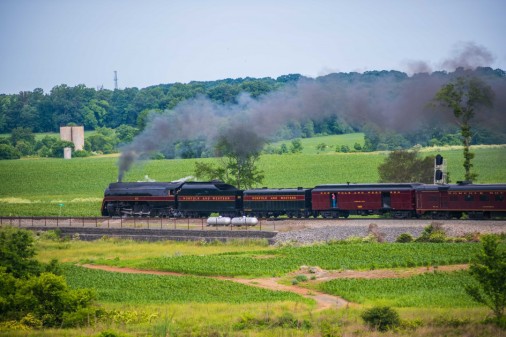 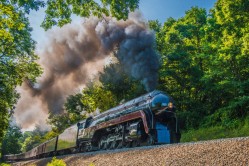 Under heavy steam, 611 climbs into the Blue Ridge Mountains outside of Markham

While at one of the stops I had heard that it was possible  to view the bridge over the Shenandoah that the train would use while turning around at the Wye (my previous research had shown that this was impossible due to it all being private land/active rock quarry/NS land surrounding the bridge).  So, I decided to take my chances and head straight down there…

My research was correct, I arrived at a private campground, and immediately tried to find the owner to ask permission (he wasn’t around).  But, in the meantime I met a few friendly campers who were also interested in trying to see a “steam locomotive” cross the bridge.  We were climbing around the banks of the S. Fork of the Shenandoah River and attracted the attention of a curious fisherman, who navigated his boat over to the shore to strike up a conversation.  Not long afterwards, came “I can take you out to see the bridge, I’d like to see the train myself.”  And the rest is history…aside from 2 other fishing boats, we were the only ones out there.

The onlybridge crossing of the journey, the engine had to back across this bridge and then pull forwarward in order to turn the train around

On the way back, I was able to pick up the 611 at two stops: historic Rectortown (the former train depot was used as a prison for POWs during the civil war) and sharply contrasting Gainesville, which is more of just a large modern freeway interchange these days. 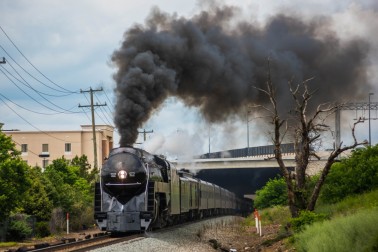