Growing up in the South, I have always been intrigued by this old adage, since all of our flowers always came up well in advance of May.  Even further North in the Mid Atlantic (after an extremely long and cold Winter), most of our flowers will be out well before May.  It seems as if the adage was either coined by someone : A. living in Saskatchewan   B. living at an elevation greater than 5000′ or C. living in the “Little Ice Age.”

I’ve been telling people for months now how excited I was about Spring, if nothing else, just to see colors other than taupe, blue, and white (even thought I deeply love winter).  Well, Spring has finally sprung in the Mid-Atlantic, and it’s been nothing short of spectacular.  So much so, that I think that my wife’s patience with my photography has been wearing thin, due to the fact that I’ve been devoting so much time to it.  But hey, the Cherry Blossoms and the Bluebells only come for 2 short weeks a year.

These first set of images are from a spectacular storm that arrived late one evening, right before sunset.  The results were some really interesting lighting conditions.  Unfortunately, I wasn’t able to leave the neighborhood to set up shots, due to the fact that I had a large pan of Moussaka (which was mighty tasty, I might add) baking in the oven.  Despite the lack of a “super interesting” venue, I really liked the results with the lighting.

This next set of images are of the Virginia Bluebells. If you’ve never seen these beauties, and are in the Mid Atlantic in mid April, make it a point to go see these. They grow in large patches in wooded river bottoms (flat places along Bull Run, the Potomac, and I’ve even photographed them along Rock Creek in the District). Where they occur, there are literally acres of these tiny blue little gems. Thomas Jefferson liked them so much that he had several planted in his garden. There’s nothing that compares to a stroll in the warm spring air along a flat trail surrounded by millions of these little guys.  The below images of bluebells are from both River Bend Park in Great Falls & Bull Run Regional Park near Manassas.

The final set of images isn’t exactly springy, but of some interesting places that I shot while out in Manassas to shoot pics of the bluebells. 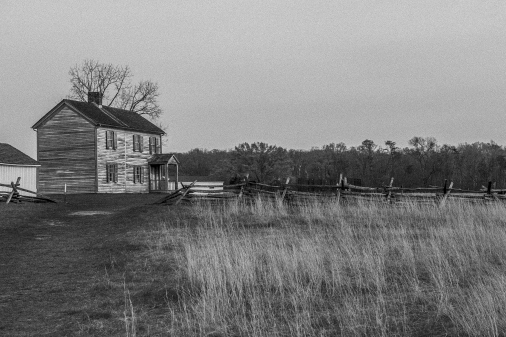 Henry House. Decided to try my hand at making this image look as old as possible. Seems kinda ironic to take a raw 36 megapixel digital image and make it look as old and grainy as possible!

It was almost 150 years to the day since the end of the civil war when we visited Manassas Battlefield. I couldn’t helpbut reflect on the men who gave their lives on this site for their cause. I’ve always been fascinated by mining activities. So, when I saw this rock quarry along US29, I couldn’t resist the chance to shoot it. I also liked the angles of all the converyor belts.

I always find the peace ofbattlefields to be so ironic.