I awoke early on Saturday morning to head down to Pennsylvania Avenue to catch the sun rising straight down the boulevard, with the Capital in the background.  However, when I looked out the window all I saw was a cloudy sky.  Not discouraged, I looked at satellite imagery and saw that there was a break in the clouds just East of DC.  I knew what this meant: spectacular sunrise.

Heading downtown, I could already start to see glints of light highlighting the clouds.  However, it wasn’t the ideal lighting condition to take pics down PA Ave as I’d originally planned, so I headed over to the Lincoln Memorial and got there just in time to take this:

It being a winter morning, there were few people down there, but those who were were staring at the sky.  I told several people visiting the city from out of town, “You could come down here 100 times and not see a sunrise anywhere near this spectacular, we were all very lucky to see this.” 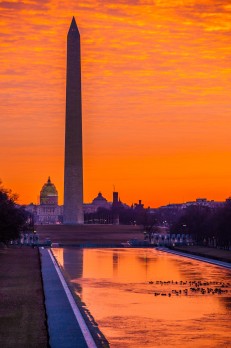 View from the Lincoln Memorial 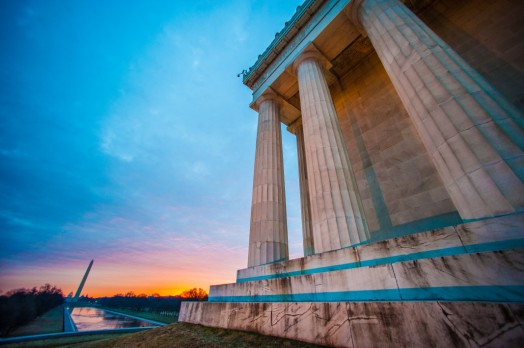 Even though the sky soon turned to winter overcast gloom, I hung around for about another hour because crowds were light, allowing for a great time to shoot the interior of the memorial.  I met a nice young gentleman who was taking self portraits at the memorial.  After chatting for a few minutes, he allowed me to take a few pictures of him, brushing up on my portraiture skills.

For a brief time out, it was a very successful morning of shooting.